How to Shoot Fire Baby! 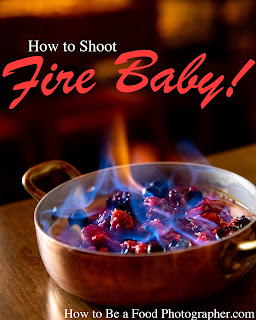 How to shoot Fire Baby!

You can do it too!

Inevitably if you’re a food photographer in NYC somebody is going to set something on fire and ask you to photograph it. The easiest way to do this is to use strobe lighting and a slower shutter speed. This let’s you control the exposures for the food and fire independently. The strobe illuminates the food that you’re photographing and the slower shutter speed exposes the fire. It’s a balance between the two and finding that can be tricky. If your shutter speed is too slow the fire will blur. But not fast enough and the fire will be underwhelming. Below I outlined a real world example of how that is done.

This video was from a food photoshoot that I did for Feroce in NYC. Feroce is a charming Italian restaurant run by the restauranteur Francesco Panella. I've worked with him and his family for several years. They're always really fun to work with and I'm always genuine surprised by the creative things that they bring me to photograph.

This was a difficult video to capture but well worth the effort. It’s actually not a video but a series of still photographs that I shot rapid fire and then stitched together in post. My first attempt was good but the fire was underwhelming and hard to see. I was shooting with strobe and dragging my shutter but the ambient light in the room was just too much to make the flames look impressive. Sheepishly and a little embarrassed I asked Stefano the chef if he could make another one. He was happy to do it. I hate it when I’m on set and a shot doesn’t go very well. I almost always shoot tethered to a laptop and everybody on set can see what I’m doing. This is great to get instant feedback and when things don’t go as planned it makes it easy to adjust and try again. Sometimes when things don’t go well it just feels like the air gets sucked out of the room. But when that happens it's incredibly important to stay calm, confident and make sure that the people that you're working with feel calm and confident too.

Fear not! Just be confident and try again.

We lit the first one on fire a couple of times again while I changed my lighting and took test shots. This was during service but at an off time when there weren’t many people dining. I asked them to turn off the lights in the restaurant closest to where we were shooting. I used one light reflector white side down and attached that to the island next to the table, and hand held a second one over the dessert. My goal was to make a tent to block as much of the ambient light from the restaurant as possible. I was using a ring light during the shoot but unplugged it from my power pack for this shot. For my main light I had a 102 Speedotron head with a beauty dish, socked and gridded 25 degrees. The power on the pack was turned all the way down and on top of that head I put a sheet of neutral density. Neutral Density is a thin sheet of gel like material that you can shine the light through and it will lower the light output without changing the color.

My goal being I wanted to dim the light as much as possible to push my ISO to a range where I could use a shutter speed that would freeze the action of the flame. We poured and re-ignited the first flambe many times and it looked soupy and not very appetizing. But by the time Stefano was ready with the second dish I was prepared for the hero. He poured the fruit and lit the flame and everything was perfect.

Almost. I didn’t notice it at the time but some of the fruit had spilled out onto the table. What made that a very difficult thing to retouch was that there was shine on the table from the light reflecting off the torch and ramekin. After some careful retouching to the individual frames to remove the spilled fruit everything was finally perfect.

This is an excerpt from my website How to be a Food Photographer This article can be found at How to Shoot Fire Baby!